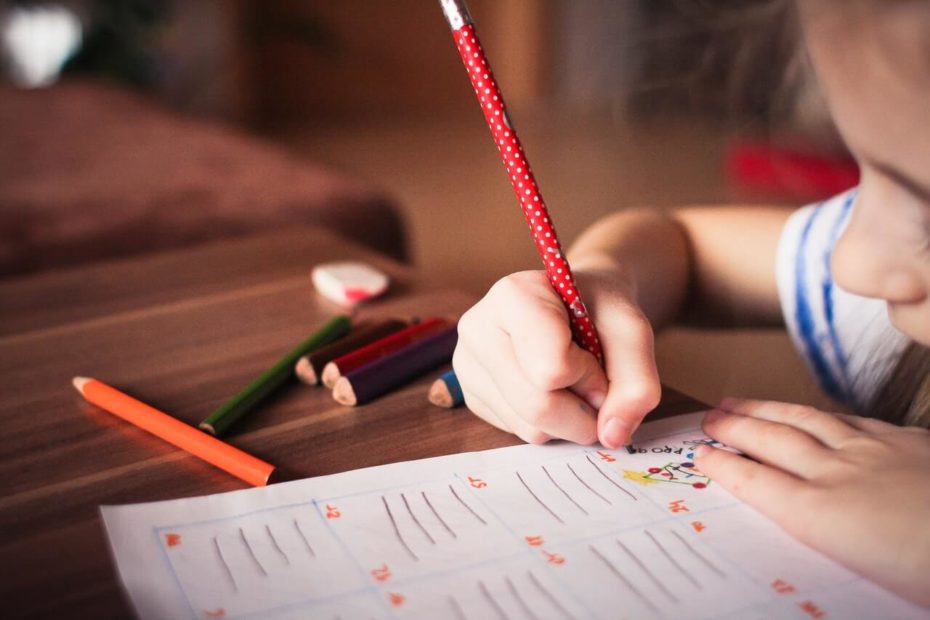 At the end of a lesson, not only is it important to review what’s been learned in the textbook, but it’s also important to check that students understand and can use the language that’s been taught.

This year, with my Grade 6s, I looked for ways to encourage them to think on their own and use English in a creative and productive way.

This was a difficult task, as my students are low-level and lack confidence when it comes to English. 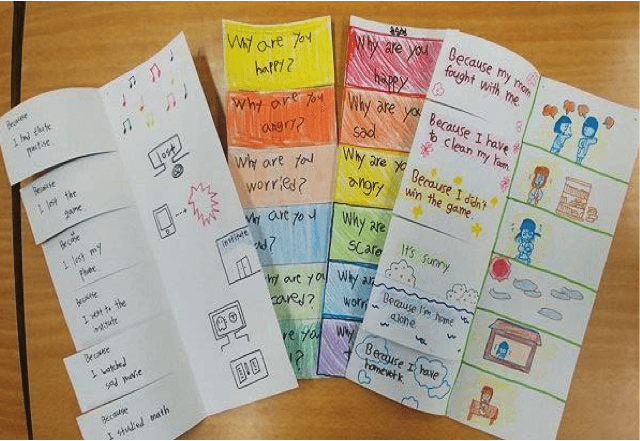 However, one effective method I found of getting them interacting more personally with English was through end-of-lesson projects that focused on translation.

I wanted them to practice moving between the two languages independently, rather than relying on a teacher to hand the information to them, while maintaining their creativity.

Translation activities can be great for this purpose, but the drawback is that it requires either your own knowledge of the students’ native language or a co-teacher who is willing to put in an equal amount of effort.

So be sure to account for this before beginning this type of task.

About the Author: Kari Dirstein completed the 250-hour TESOL Diploma while teaching English in South Korea with EPIK. Kari has experience teaching grades 4 to 6.

Why Are You Happy? 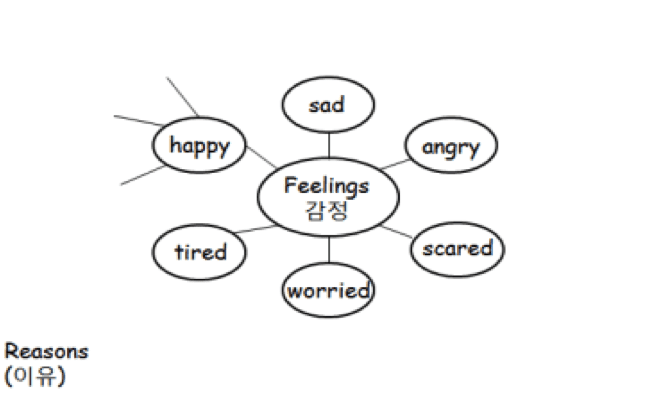 This type of project was a huge success with my students when used in one of the earlier lessons in the Grade 6 Cheonjae textbook, “Why Are You Happy?”.

This was also the first time I tried this type of activity with my students.

When we arrived at the end of the lesson, we had studied all of the key expressions and target language, and next, I wanted my students to try using the same language in a more personal and creative way.

I decided to have them make a sort of panel book, with each panel a real-life reason for why they were feeling happy, sad, angry, and a couple of other key emotions studied in this chapter. 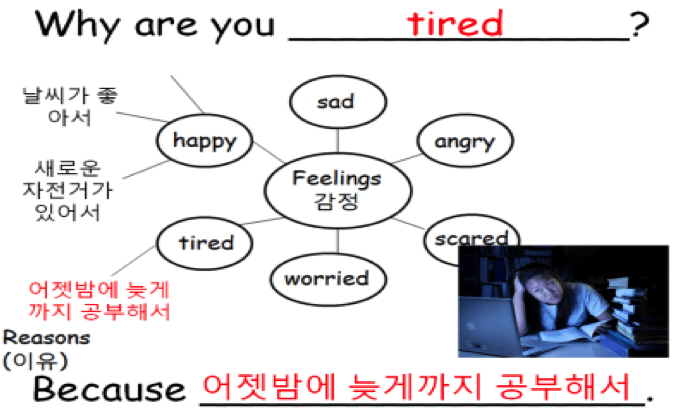 As mentioned before, my students lack confidence in the ESL classroom, and I had to trick them a little bit in order to get them started on their projects.

To begin, I told them that we were going to make mind maps about what reasons they had in their lives for the different feelings we learned.

I told them I wanted them to write at least three reasons for each feeling, in order to get their brains thinking and ideas flowing.

I had them do this part in Korean. We did an example together on the board, and then I let them try it themselves.

This activity took the latter half of one 40-minute class.

The next time we had class, I told them that we would be writing what we had written on our mind maps in Korean, into English.

I told them they had to choose at least one sentence from each of the six emotions on the mind map and to do their best to translate all six sentences into English.

As with the previous class, we did an example on the board together before I let them get started.

However, my students began complaining that this was too difficult for them.

I gave each student an English-Korean dictionary and told them that so long as they put in the effort to translate their work, that I would fix their sentences and make them grammatical.

I emphasized that I was not looking for perfection, and not to worry about any mistakes they thought they were making.

I think that many students discovered that, as they worked on their mind maps, they could complete the activity with minimal help from the teacher.

This portion took the entirety of one 40-minute class.

I collected the translated mind maps at the end of class, which I reviewed at the end of the day, and fixed any grammatical mistakes.

I checked that each student had at least one thing to write for each emotion.

In our following class, I handed everyone back their mind maps and introduced the final part of the project.

Through a slideshow, I showed them an example of the panel books and explained that I expected full English sentences, as copied from their mind maps, as well as a picture to accompany each one.

As they worked on their projects throughout the class, I was surprised by how productive they were being.

As I walked around the classroom checking on their progress, they were all working very hard on their books.

When I collected their completed projects at the end of class, it was satisfying to see the amount of effort they’d put into their projects. 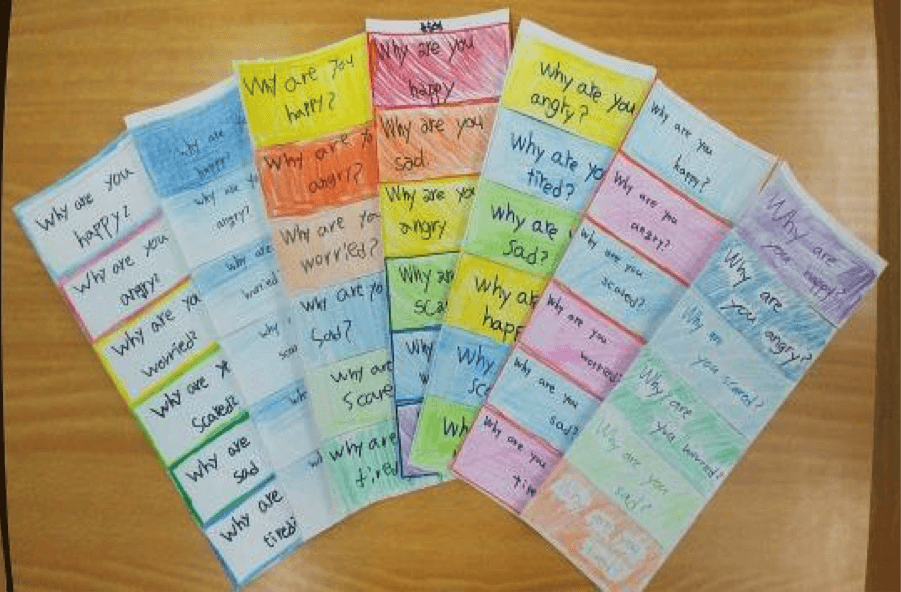 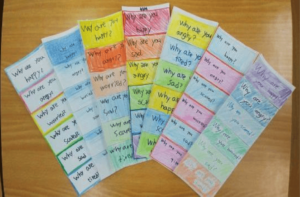 I can confidently say that the work my students completed for this project was the best work I saw them do all year.

This type of project is very time-consuming and can be tough on the teacher due to out-of-class work, so I was only able to do these types of translation activities a handful of times throughout the year.

Yet despite this, what motivated me to continue using these activities was that my students were productively using the English language and were enjoying it at the same time.

My students are rarely focused while we’re in class and have little interest in English due to their overall low ability, but I think that by seeing first-hand how it was possible for them to construct personal and complex sentences from their first language into their second, they gained confidence.

It was clear from the final products, with the well-drawn pictures, rainbows of colors, and individual personalities, that my students had put in a lot of time and effort into making one complete project.

This type of project is applicable to many lessons in the Grade 6 Cheonjae textbook.

For example, for Lesson 13, “Do You Know Anything About It?” you could have students write about a personal possession and introduce it to the class by similarly making a mind map about special things in their lives, translating it, and finally writing a short paragraph, verbally presenting to the class, or making a slideshow using the translated material.

An idea for Lesson 7, “Can You Come to My Party?” would be to have them create an invitation for a crazy party.

You could brainstorm via mind map some odd party ideas, such as Frozen Day or Spaghetti Day, and some branching arms of the map to describe what happens at the party.

The completed invitation will have one of these ideas translated, complete with a description of the party and the time and place.

This is a great activity to encourage confidence and creativity in low-level students.

Although it takes a considerable amount of class time and extra out-of-class work, the results are certainly satisfying, and I encourage teachers to try it in their ESL classroom.

I think that both you and your students will be impressed by the final result.

Using L1 in the ESL Classroom